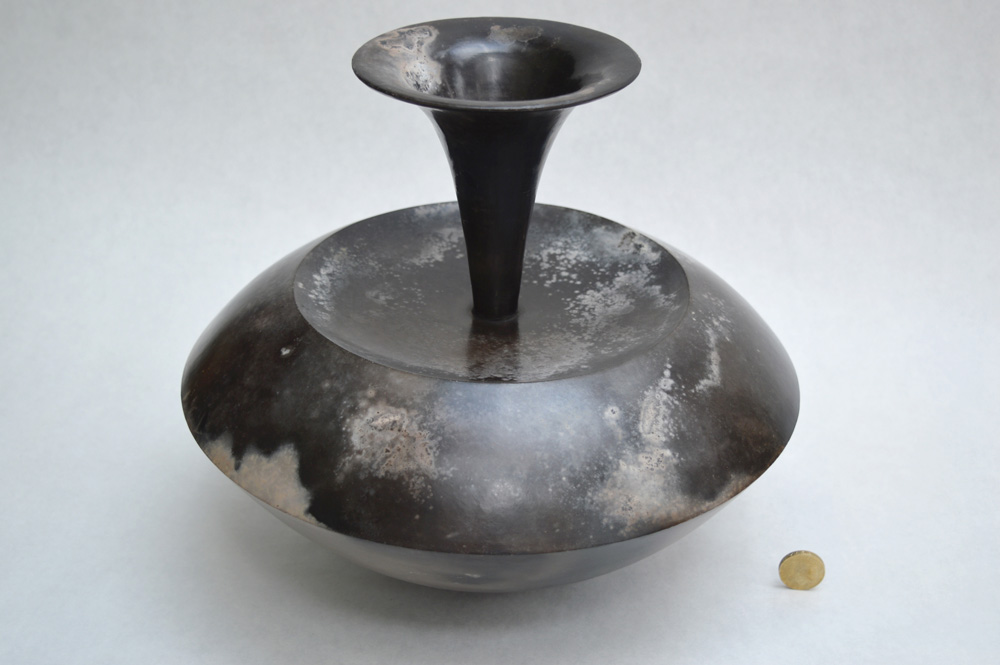 David’s work is thrown, assembled, burnished and pit-fired with salt and oxides, and is inspired by local finds of Romano-British pottery and Mesolithic stone tools.

I have been potting since my school days, one formative moment came when, at the age of seventeen my dad took me to see George Curtis at the Littlethorpe Pottery, near Ripon. I spent only a day there but learned so much. I then proceeded via “Pre Dip” to Bath Academy of Art at Corsham to study under Ian Old, Brian Newman and John Colbeck. I worked for the majority of my adult life teaching pottery in parallel with being senior technician in Brighton Polytechnic, later University of Brighton both on the Combined Arts course and the Sculpture course. During this time I pursued my own practice to greater or lesser degree depending on the commitments that arise from having a family. Latterly I have had a little more time to do this. I have experimented with stoneware, raku and burnished smoked/pit/bush fired ware. In the year 2000 a farm near where I live and work changed hands. The new farmer ploughed all the fields and then it started to rain and rain and rain. Lewes was flooded but the land started to reveal some history. On a piece of ground that appeared vey dark I picked up a piece of Romano-British pottery. Of a course clay but rudimentarily burnished and still waxen having been buried in clay for about 2000 years. To establish this iron making site was not one already mapped I walked some adjacent fields. Here the ploughing and rain washing had revealed Mesolithic stone tools, one or two of which were fine examples. The finding of those pieces started to influence my work both in form and surface treatment. There are, of course other influences such as natural forms, which are reasonably obvious. The observer might notice a concern with edge and boundries in some of the work and the colours and polish of flint in others. The process is similar to that used to make the Romano-British ware and similar to that used in societies that make bush fired ware all over the world especially Africa and the Pueblo culture of southern America. The differences are that I use a very refined clay albeit course in texture, containing pre-fired china clay known as molochite. The work is then burnished using a polished stone until it achieves I high shine and is then fired to a very low biscuit. Some pieces are then decorated and some are not but all are then fired in a basic brick kiln with woody material, bracken and other woodland debris along with oxides and salt. Those pieces that survive this process are finished with a beeswax product as was the shard I found.

Click on a marker to reveal more detail about the venue.

We use cookies on our website. Some of them are essential for the operation of the site, while others help us to improve this site and the user experience (tracking cookies). You can decide for yourself whether you want to allow cookies or not. Please note that if you reject them, you may not be able to use all the functionalities of the site.